t-PA is a plasminogen activator produced and released in its single chain form with an apparent molecular weight of 70kD. Single chain t-PA is converted to double chain t-PA by plasmin mediated cleavage of the Arg-278-Ile-279 peptide bond. The resulting 2-chain molecule consist of a light chain (B-chain) containing the catalytic site Ser, His, Arg and a heavy chain (A-chain) containing two kringle-structure, an EGF-domain, and a fibronectin finger domain.

The fibrin specificity of t-PA is mediated by fibrin binding via finger and/or kringle-2-domain, wherby, in latter case, lysine binding sites are involved.

t-PA circulates in plasma at a concentration of approximately 5ng/ml. However, 95% of circulating t-PA is complexed with plasminogen activator inhibitor (PAI-I) and less than 5% circulates in its free form. Upon venous occlusion the concentration of t-PA antigen increases to 10 ng/ml or higher leading to measurable fibrinolytic activity. This is probably due to a combination of increased t-PA release by endothelial cells and a reduction in the t-PA clearance from the occlusion site. 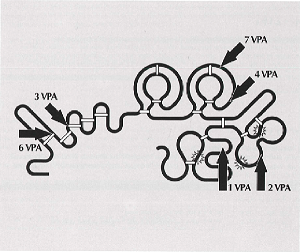