Plasminogen, the precursor of the serine protease plasmin, is a single chain glycoprotein with a molecular weight of approximately 92kD. Plasminogen activators cleave a single peptide bond in plasminogen between Arg-560 - Val-561 to generate the two-chain molecule plasmin which is a potent proteolytic enzyme with trypsin-like specificity.

The fibrin specificity of the proteolytic action of the active site contained in the B-chain of plasmin is  mediated by kringle structures in the A-chain which can bind to lysine residues as they are exposed during fibrin formation. These kringle structures are also responsible for the affinity of plasmin(ogen) to alpha-2-antiplasmin, histidin-rich-glycoprotein and thrombospondin. 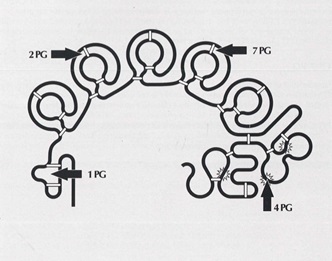 The functional domains of plasminogen are revealed by elastase cleavage of the molecule which result in 3 major fragments: kringle 1-3 fragment, kringle 4 fragment and kringle 5 containing mini-plasminogen.